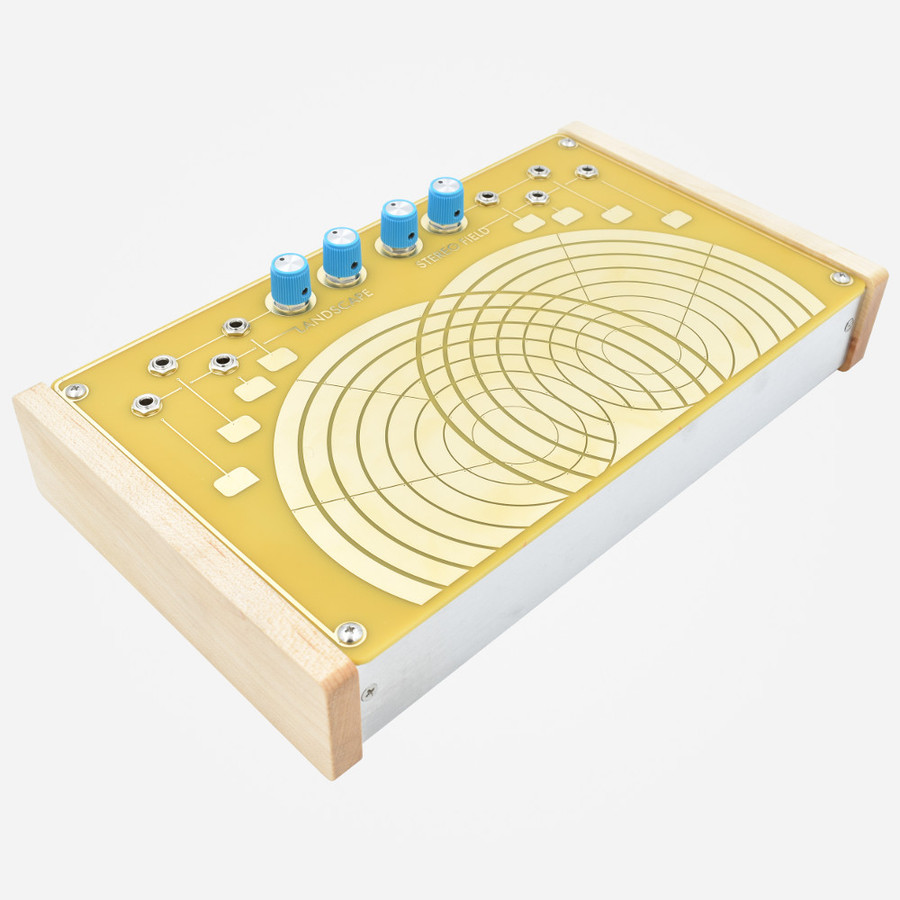 The Stereo Field allows its user to manipulate and patch two analog stereo preamp circuits via touch plates. By utilizing skin conductivity as new paths for current to follow you are creating "new circuits" and new sounds in relation to where your fingers are patching. The individual touch plates are directly connected to nearly every connection point of every component in its circuitry (located directly under each corresponding touch plate). When touched with multiple fingers it will create atonal analog feedback with either of the two mirrored circuits represented by interlocking touch-plate circles. The resulting feedback can go beyond the abilities of human hearing (Take caution!) and down to the very slow clicks of a pulse waveform and both can often be happening simultaneously . These parallel mirrored circuits can be finger patched separately or together yielding vastly different chaotic results in regards to texture, timbre and stereo imaging. This instrument has the ability to create atonal synth tones in stereo (and quad) as well as process incoming stereo audio (and quad) sources via 1/4" and 3.5mm ins and outs. Incoming audio sources can be "patched" or rewoven into any area of either or both of the circuits via skin contact. The two stereo input volume knobs (center) shape and effect distortion, drive amounts, internal feedback pitch, and modulation rates depending on how your fingers are patching. The quad inputs and outputs via the 3.5mm jacks have small touch plates leading to and from allowing for touch access of each of the 4 inputs and 4 outputs. If multiple audio signals are traveling into the Stereo Field these audio sources can be intermingled and can modulate one another, again depending upon where your fingers are patching. Sending CV signals into the 3.5mm input jacks will open up many more possibilities both in terms of synthesized sounds and audio processing.

The sound is sometimes easy to describe; (distortion, filtering, resonance, high-pass, lo-pass, feedback, sine waves, square waves, pulse width modulation, formants, white noise, pink noise, metallic noise, stereo rhythms, wave-folding, frequency modulation, amplitude modulation, spacial shifts, panning, sub octaves, pitch following) but most of the time these definitions fall "between effects" or in combinations of multiple effects that can be shifting, feeding back or pulsing in sync with incoming audio during processing. Since the user is directly touching analog circuitry through gold touch plates, shifts in pitch/timbre/stereo/drive/modulation can be accessed instantly. The stereo (or quad) imaging of the instrument is both influenced by feedback and modulation in regards to where your fingertips are patching along with modulation caused by incoming audio content. In addition to the sheer number of patching and finger pressure combinations available, the instrument has shown theremin-esk properties in certain settings due to the large surface area of the gold plates. To bring this even a step further the synth/modulation/processing tones can be triggered by only breathing on the plates using the moisture content of breath to partially control and sculpt the audio.

Stereo Line Out 1U