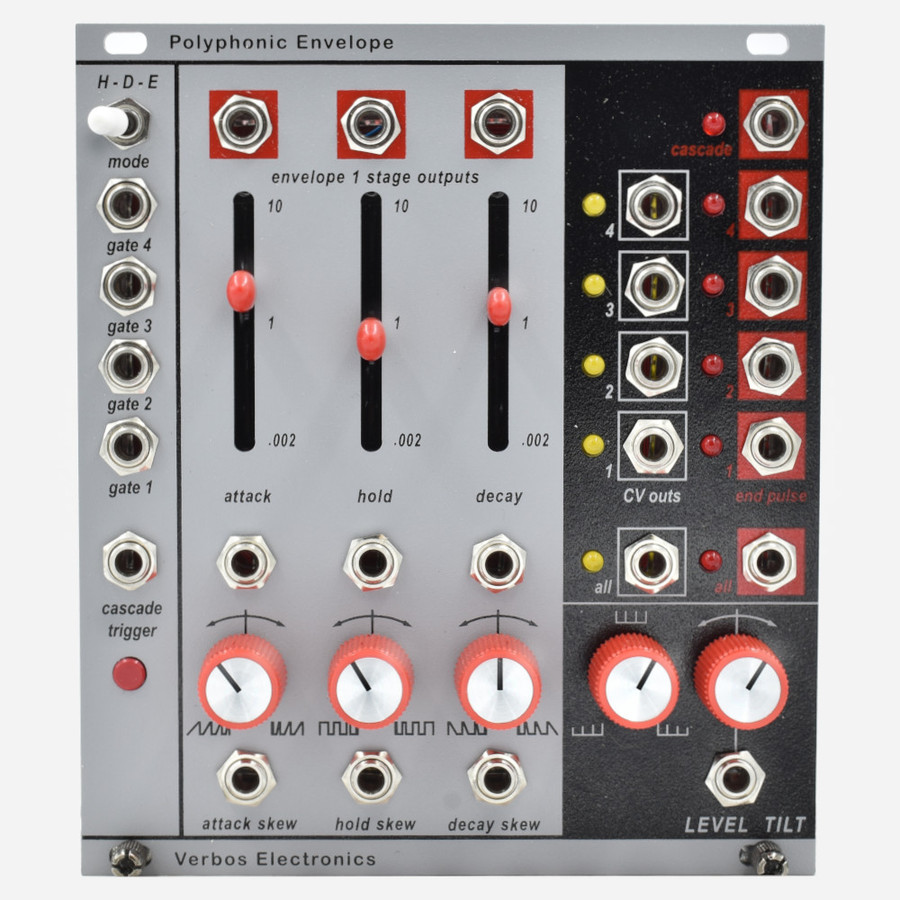 The Polyphonic Envelope from Verbos Electronics is a unique set of 4 Attack-Hold-Decay envelope generators which can be used together or independently. Cascade logic allows the 4 envelopes to trigger sequentially in 3 modes with subsequent envelopes starting at the Hold, Decay or End of the previous envelope. Each envelope has its own Gate input, CV output and End Pulse output, allowing them to be used in up to 4 voice polyphonic patches or patches combining the Cascades and independent gating of them.

Although nominally controlled from one set of sliders, Skew controls allow the times to change as each new envelope turns on. Also a facility is provided to make the envelope one’s level be 10 volts and get lower as they Cascade or start lower and end at 10 volts by the 4th envelope. All parameters, of course, can be voltage controlled.

When the envelope generators are used as a group, logic is included to Cascade them one after another. Although Skew and Level Tilt can be used
to vary the envelopes when they are used individually, these controls become particularly useful while the envelopes are Cascaded. The Mode switch selects H, D or E (Hold, Decay or End) to determine which stage will trigger the next envelope in a Cascade.

The Cascade trigger output sends out a trigger corresponding to whichever stage is used in the current mode from Envelope 4, allowing a second Poly- phonic Envelope (with four more envelopes) to be cascaded after the first. Cascade mode is dynamically engaged and disengaged allowing envelopes to be triggered independently, even between Cascades. When gated from their individual Gate inputs, all envelopes can be used independantly, including loop- ing to create four unsynchronized LFOs. The All outputs combine all four CV outputs and all four End Pulses.

AHR Envelope are excellent for providing a punchy response from LPGs!  Cascade envelopes to create delay like effects but controlling the timbre instead of just repeating the sound!  You don't need four voices to get great sounds from the poly envelope, poly envelope is perfect for use in a single voice where you might skew the vca response to be longer and the filter response to be shorter.