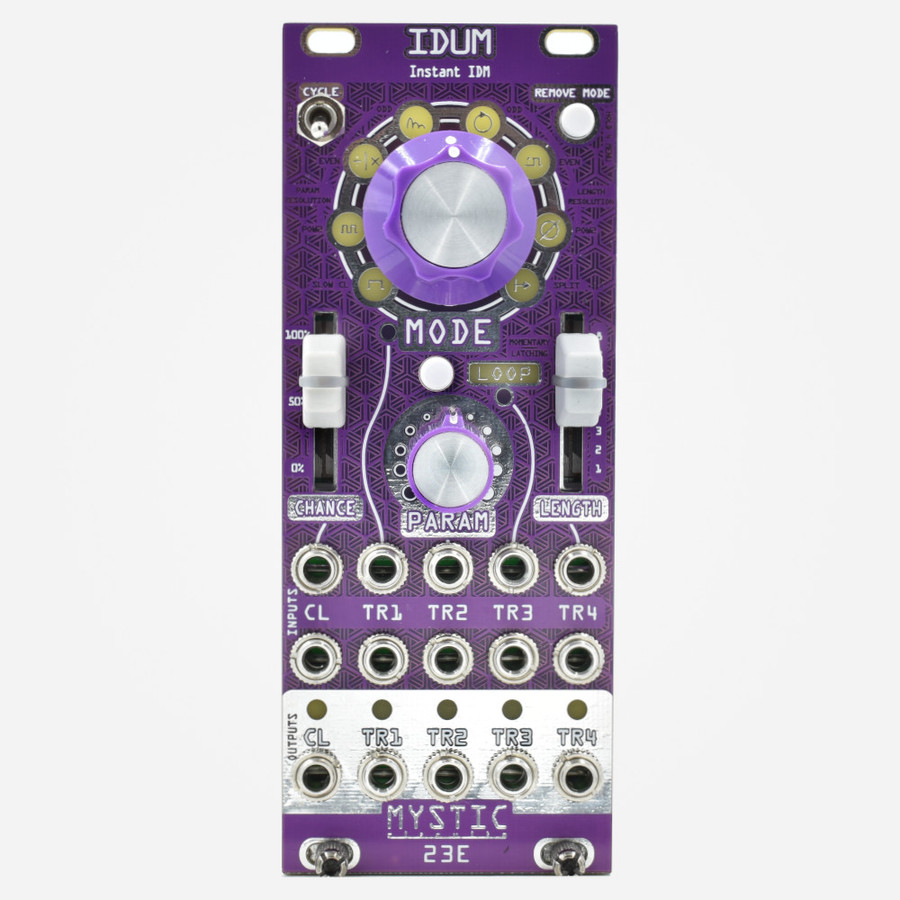 IDUM is a gate processing effect that turns its input effortlessly into IDM.  Making complex electronic music with the modular usually requires meticulous sequencing done in advance or a large ecosystem of modules. Unfortunately, the level of expertise needed to accomplish this is not accessible to the average modular user. IDUM aims to make this process easier and put Intelligent Dance Music, also known as IDM, into the hands of people with average intelligence. IDUM does not require much knowledge to get immediate and compelling results; but with some extra familiarity, this module can enable innovative music making techniques. Instead of generating musical patterns on its own, IDUM acts like an effects processor for the sequences that run through it. For example, a filter or a delay allows the user to alter their sound by twisting the knobs or modulating the parameters. Similarly, IDUM manipulates the actual gates and sequences of connected modules, but with a level of playability normally inaccessible to a sequencer. IDUM can vary carefully crafted sequences or turn your music into an onslaught of controlled chaos. Its open source code and hardware based on the beginner friendly Arduino Nano Every encourage users to tweak their modules to taste or to add new features all while ensuring future improvements as IDUM makes its way into the wild.

In addition to these modes, IDUM features an eight step looper that loops incoming gates as well as any effects that were active on those steps.

To control when IDUM's effects are active, the CHANCE slider sets the likelihood that on a given step an effect will activate and the LENGTH slider sets how many steps the effect will last for. The PARAM knob controls a parameter unique to each effect while the MODE knob selects the mode. All of these controls as well as the LOOP status have their own CV modulation inputs.

Unique to IDUM is its ability to manipulate external sequencers using the clock output. This includes functions like: pausing the clock when an effect is active for dynamic clock division, skipping forwards or multiplying the speed of the clock in SKIP mode, and looping a sub-section of sequencer steps in the looper. To keep everything tamed while manipulating the clock, the CYCLE switch will send out bursts of clocks to catch your sequencer up with its original sequencer position after an effect has completed. Keep in mind that not all sequencers like to be clocked fast enough to work with these features, so for best results pair your IDUM with a TREE/ LEAVES combo from Mystic Circuits.