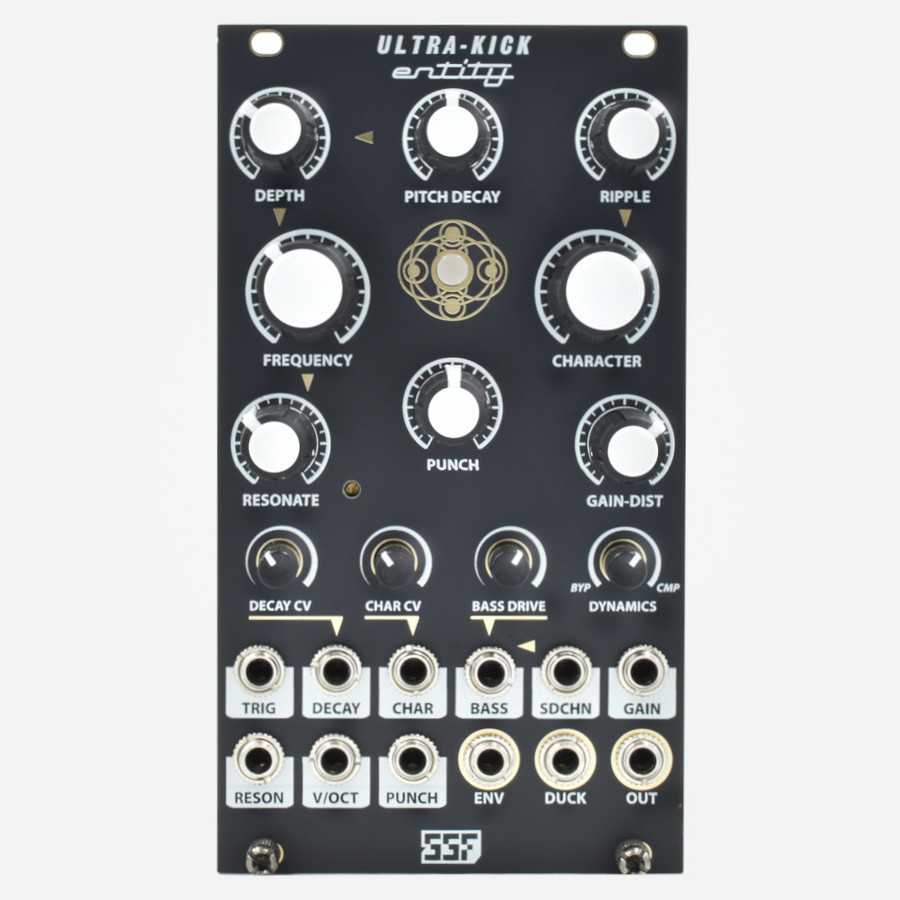 The Entity Ultra Kick is the newest version of the Entity Bass Drum Synthesizer!

The Ultra-kick is at it’s heart a kick drum module. But like it’s predecessors, offers the ability to synthesize more than the name implies. Users of the BDS requested that the control range be a little easier to manage when it came to producing kicks. The UK features control over the parameters such as pitch and decay time while still offering a relatively extended range for producing bass and other percussion, as well as general synth sounds. I hope you find it to be a bit more manageable and enjoy the extended range of sweet spots for producing a myriad of kicks and more. New to the UK is a dual-core resonator topology evolved from the original Entity’s single core designs. The main core handles the frequency component while the character core provides a whole new level of sound sculpting beyond what the original designs were capable of. The character control is a major feature of the UK and is critical for the ability to craft a wide variety of impulse/attack styles and overall sound characteristics. Having two resonator cores also permits one of the cores to be modulated by the other. The addition of the ripple feature accomplishes this by allowing an adjustable amount of the main core to modulate the character core. Ripple dramatically enhances the initial impulse transient offering a novel means to shape clicks and accents, as well as providing additional girth and frequency modulated tones. Since a resonator is essentially a filter, the additional core via character can provide low-pass filtering for muted and softer kicks as well as unison resonant boosting when the main and character frequencies are matched. Overall I hope you and these features to be worthy additions to this Entity's design. As a big fan of distortion and specifically transistor soft-saturation, I have included an interstage saturation circuit that sits in between the resonator cores. This was originally the output stage of the BDS, with an improved version with less noise and more gain ported into the UK. Having this feature sit before the second core allows for an even greater level of control and variety of effects on your sound. While this is a great feature for adding gain and beefing up the low end when used subtly, it has a great effect on the emphasis of a kick, especially when coupled with the character and ripple controls. A lot of headroom is provided for more extreme distortion if you so desire. At the top of my list for features as always to include a compressor. The UK’s compressor borrows from the Autodyne with an auto response, NY style dry/wet blending and a side-chain filter. Except this time the side-chain filter is variable via a control called bass drive with voltage control. Bass drive gives you the ability to recoup lost bass response from the compression process as well as increase bass distortion and growl. Even more gain and distortion is further controlled via an aptly named gain-dist knob and, yet another layer and flavor of gain control and distortion is provided via limiter circuitry located in the final stage of the UK, hopefully now fulfilling your distorted needs. Finalizing the compressor section we have the bypassed and fully wet blend control called dynamics to give you the greatest control over compression and final stage distortion.