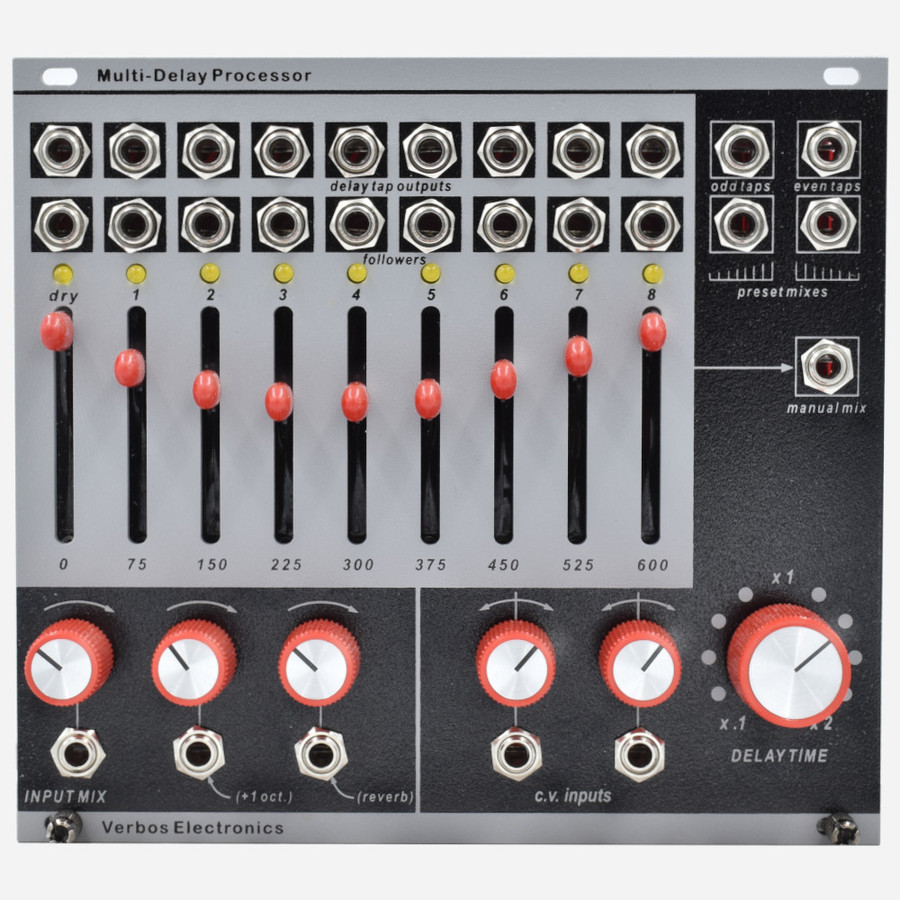 Verbos Multidelay is an evenly spaced VC 8-Tap Multi-tap delay.  Each Tap also outputs CV from an envelope follower for cascaded and delayed CV events.  Multidelay features 3 inputs, with one normalled to a 1 octave up pitch shifter for pitch shifted delays and another channel normalled to an internal reverb for dense atmospheric sounds.  Dedicated odd and even tap outputs allow stereo imaging of the output, and dedicated mix outputs or individual tap outputs patched back into the input provide a ton of options for feedback/repeating of certain taps and not others.

Time domain effects don’t always seem to belong inside a modular system. Recording engineers prefer to leave delays and reverbs for the mixdown stage. But, what if the effects become a fundamental part of the sound? Would a guitarist be asked to not use pedals? Modular users often employ effects to create atmosphere. Reverb, delay and pitch effects often interact so deeply with drones that they become part of the patch. The Multi-Delay Processor is a bank of 8 digital delays. Those delays are chained in series, and voltage controllable from 10ms to 150ms. Outputs from the delays are on jacks as well as in several mixes. The odd taps are summed at full level, the even taps too. The convenient mix of all 8 taps falling in volume and the mix of them rising in volume are given as preset mixes. A manual mix of the taps and the input signal is created on the panel. Each delay and the input also has an envelope follower output. This allows the creation of rhythmic clusters of control voltages, useful for self modulation or with modulation hungry modules like the Harmonic Oscillator and Bark Filter Processor. There are 3 signal inputs. When using only the first, reverberated and octave up pitch shifted feedback are normalled into the others. This allows reverb