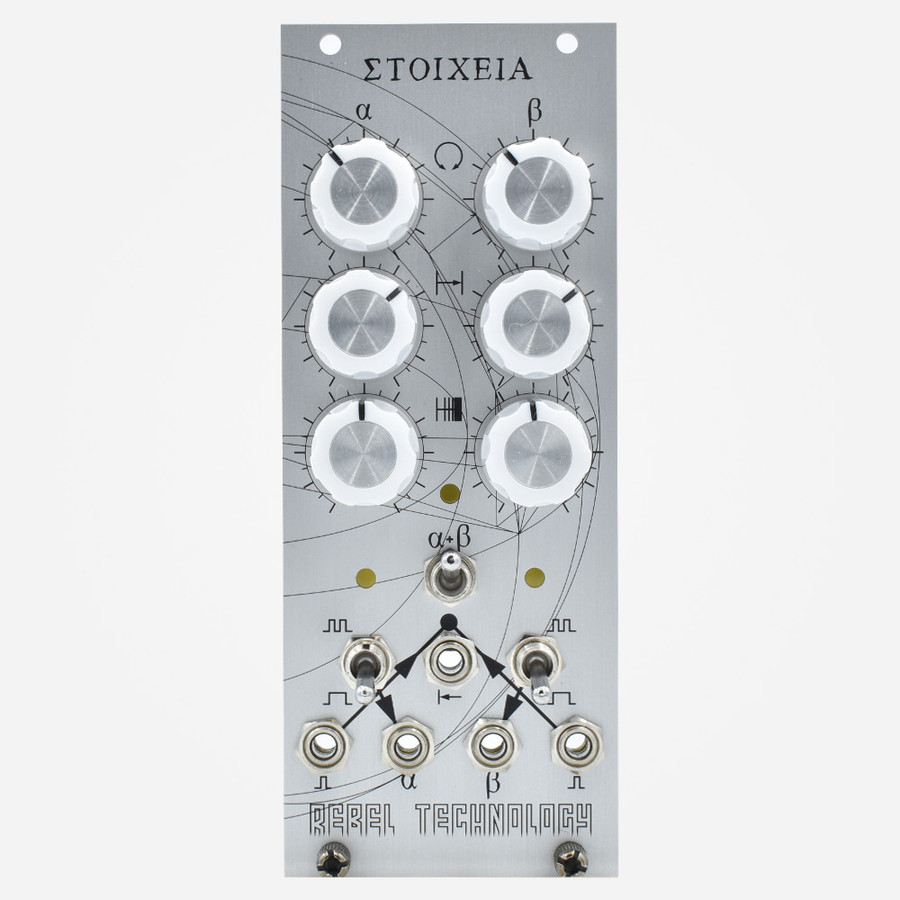 The name (Στοιχεῖα, Stoicheia, or Elements) comes from the title of Euclid’s book Elements in which the algorithm was first described.

Each sequence is controlled by a column of three knobs and a switch. The input parameters to the algorithm are sequence length and fills.

The length of the sequence, measured in clocks or beats, is controlled by the second knob from the top. The range goes from 1 (fully counter clockwise) to 16 (fully clockwise), with 8 in the centre position.

With its switch in the centre position, the sequence is turned off. To turn it on (Trigger Mode), push the switch up. In trigger mode, the sequence will switch its output high when receiving a clock signal rising edge (low to high transition), provided the next beat in the sequence is ‘on’. When the clock signal falling edge is received (high to low transition), the output will be switched back to low (0v). This means that the output trigger signals have the same pulse width as the input clock. So if the clocks are generated with very short pulses, the output triggers will be equally short. As a consequence, a pulse width modulation on the input clock signal will be passed on through the sequencer.

Pushing the switch down from its centre (off) position puts the sequence into Alternating Mode. In alternating mode, the output goes high on the first ‘on’ beat, and remains high until the next ‘on’ beat. In other words, the output toggles on every ‘on’ beat in the sequence. The up and down transitions occur on the rising edge of the input clock.

The centre jack can be used to connect a reset trigger. When a reset is received, both sequences restart at their first position. This takes into consideration the rotation setting: If sequence A and B have different rotations, they will remain offset in respect to each other. Reset can also be manually triggered by pushing the centre switch momentarily upwards.

The centre switch can be pushed down, which enables Chained mode. When chained, the two sequences are repeated one after the other, instead of concurrently. This is very useful to build up more complex patterns. In chained mode, the output of the combined sequence is available at both output jacks. On startup, the first sequence will play through to its determined length. It will then stop, and the second sequence will play through to the end, at which point the first one starts up again. For example, setting the first sequence to length 12, and the second to length 4, will result in a combined 16-step sequence. A reset signal in Chained mode brings the combined sequence to the start of the first pattern. Rotation works as in regular mode. Chained mode can also be used to create sequences longer than 16 steps.