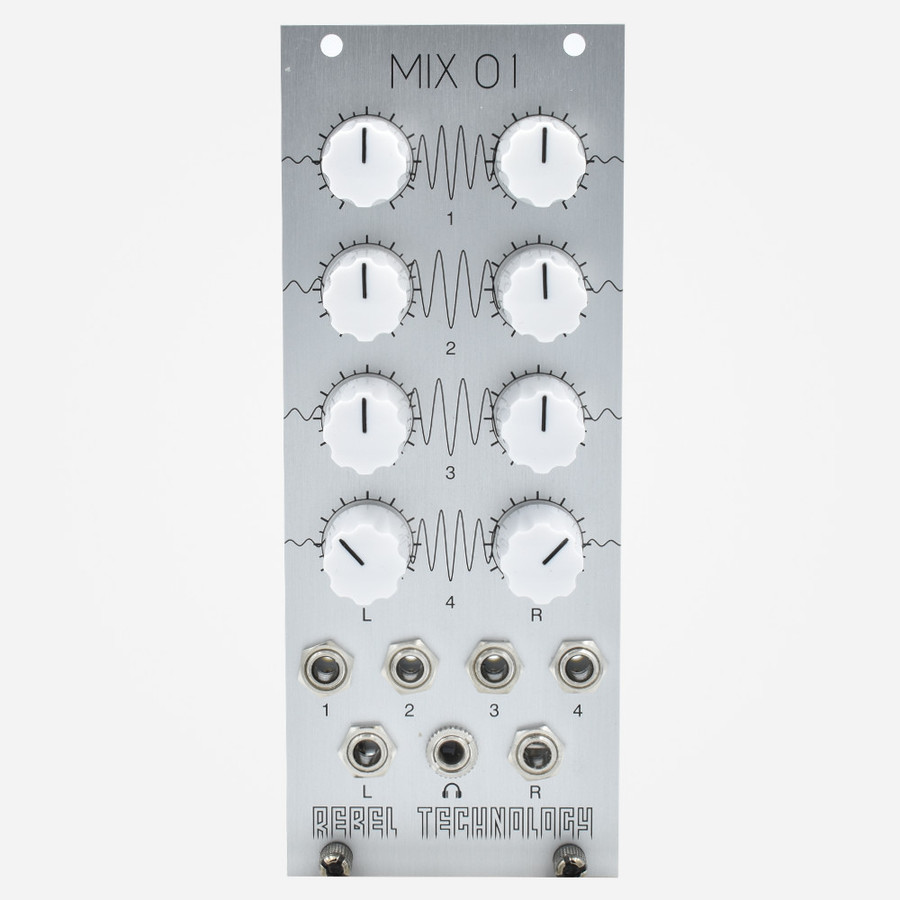 Mix 01 is an extensible 4 in / 2 out matrix mixer with dedicated stereo headphone output. It delivers crystal clear, transparent audio as well as precise control voltage mixing.

Mix 01 features the new Rebel Technology analogue bus, allowing compatible modules to be interconnected without additional patching. Two or more Mix 01 modules can be combined to create a matrix with more inputs and outputs. Balanced inputs and outputs can also be added, either for front panel mounting or built in to the modular case. Midwest Modular will include the link cable for free with purchase of two or more mix modules!

The first row of jacks are the inputs for channels 1 to 4. The second row has the two output channels on individual mono jacks to the left and right respectively. In addition there is a stereo headphone jack in the middle with line level output.

By default the Mix 01 has audio taper knobs. At fully clockwise, the output level is +6dB, 2x gain. Unity gain is at 3 o’clock, and infinite attenuation at the fully anti-clockwise position.

If required, linear taper can be configured by cutting the solder jumpers on the back of the module. Outputs

The left and right mono outputs provide DC coupled Eurorack levels. These outputs are suitable for both audio and control voltage mixing. The headphone output is attenuated to line level, and suitable for connecting headphones or for use as a stereo line out. It is AC coupled and safe to plug into mixers and audio interfaces. Note that with a strong input signal and full mixer gain it is possible to exceed normal line levels, so please beware to keep the outputs at comfortable and safe listening levels at all times.